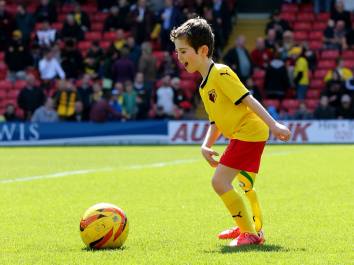 That’s seven. Football…Yeah, I play eight sports and I do all of them about 8 to 9 times week.

What are your favorite foods? Chocolate. I love fruits and vegetables. I eat tons of them. I eat up all the mango (Juliette explains that Rio is on a health kick).

Do you have any pets? In about 1 hour and 35 minutes, we will have a dog. (Juliette explains that they will be taking care of Rio’s grandparents’ dog for the night. The puppy makes a brief appearance later in the interview. It’s a cute little poodle. Caitlin tries to talk to it via FaceTime using her superpowers. See below.)

What books do you like to read? I’ve got tons of books. I like Gruffalo (Rio proceeds to show us at least five titles in the Gruffalo series), Curious George (Caitlin is thrilled with this selection) and Horrid Henry. (Caitlin shares one of her favorite books, Emmanuel’s Dream by Laurie Ann Thompson. It is the true story of how a boy born with a limb difference changes the world.)

What movies do you like to watch? Well, I was about 5 minutes into the Cars 2 movie before you called. I like the Rio movies. I like all the Cars movies, Monsters Inc., Monster University and Big Hero 6. (“Oh, I love Big Hero 6!” exclaim Nolan and Caitlin simultaneously.) Then, Rio parades all of the Monster University characters from his bed past the screen. Nolan and Caitlin try to remember some of the characters’ names. This leads to Caitlin running to her room and returning with a bag of TY Beanie Boos to share. When both parades are over Nolan announces that it is time for the next question, and they get back to the interview.)

What are your superpowers? I don’t really know what to say for that question. What are yours? (Caitlin responds, “Oh, I can talk to animals. And I’m good in the ocean. I have nature superpowers.” Nolan and Rio say they need to think about it more. Juliette says she thinks Rio’s superpower is that he always gets up and keeps going. Rio agrees and shows us a recent injury on his finger to prove her point. Nolan says he has the same superpower and shows off his cut and bruised knee from a recent fall on his bike. Once all injuries have been shared, we get back to the interview.)

What accomplishments in sports are you most proud of? I’m not sure.

(Rio is being modest. He shows us lots of medals that he has earned and a recent certificate from an adaptive sports camp program. Juliette helps out with the question and talks about how since 2013 Rio proudly participates in an annual run around London’s Olympic stadium. Conversation about this event leads Rio to move towards the cabinet above his bed. There he shows us the pictures displayed. They include him standing with his Paralympic heroes like Jonnie Peacock, Alan Fonteles and Richard Whitehead, except one where he is with Prince Harry. Yes, THE Prince Harry. Rio has many accomplishments to be proud of and he is only 7 years old.)

What makes a good teammate? Someone who tries hard. I’m very fit. (Rio is known for his hard work and shows us his muscles to prove it.)

What makes a good coach? Someone who makes it fun. (Here’s some video of his coach, Hayley, making it fun Track & Samba.)

How would you define ability? You can do anything. You are still the same. You can play sports. Just if you have a straight leg on, you can’t bend it. (Juliette adds challenged athletes will get to the same place they may just take a more scenic route by doing it differently.)

What is your ultimate sports goal? I want to be in the Paralympics or a footballer (a professional soccer player).

Quick Virtual Tour of Houses & Back Yard or Garden

What advice do you have for other young athletes? To keep trying.

“Goodbye” everyone shouts at the screen and waves to each other. 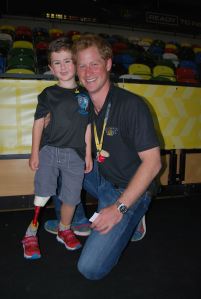 What’s Next for These Super Kids?

Our one hour interview lasted nearly two hours and was filled with stories, laughs and surprises. As life sometimes creates unexpected opportunities, Rio, Nolan and Caitlin will have a chance to play together this summer in Maine when he comes to the US to attend Camp No Limits. They can’t wait to explore the rocky coast and see Rio try out his new water leg. Although Rio is on a health kick, eating some ice cream and trying a famous Maine Wicked Whoopie Pies are part of the plans. Eating lobster will not be a part of the menu. Despite encouragement from Nolan and Caitlin, Rio remains a bit reluctant to eat lobster because as he states “it could pinch me in my stomach.”

Thank you Rio & Juliette for your time. We can’t wait to see you in July. Until then, keep believing in the possible!

Now dressed, Nolan sits down to eat his breakfast. He takes a bite of his blueberry muffin. “Mom, what do you think Rio is doing right now? I bet he is playing a lot of sports…It’s not fair. He’s had like 3 hours to play, and I just got up.”

I dial the Woolf family in London.

“I knew we would have technical difficulty,” Nolan states as I bumble over how to make an international call via FaceTime. I struggle to make it all work.

“Let me try it again,” I say as I hold my breathe and push the video icon. We wait as we imagine the familiar triple beep sound making it’s way across the Atlantic, and then Juliette, Rio’s mom, appears on the screen.

“Hello!” everyone shouts and waves at once, except Rio. He’s missing.

In a flash, Rio appears “I have three legs,” he explains as he attempts to hold his three prosthetic legs up to the screen (his “bendy leg” or knee-jointed day leg, his running blade for sports, and his water leg for swimming in the pool and ocean).

He immediately starts talking about his brand new water leg. He carefully turns it around in front of the screen. It is covered in colorful decals. Rio explains each picture. First, he shows us the logo from the Rio 2 movie. Next, he turns his leg to display his own personal logo Run Rio Run, the Brazilian flag, the 2016 Paralympic Games and two pictures of his favorite dolphin, Winter from Clearwater Marine Aquarium. Nolan and Caitlin look in awe, even a bit envious. Rio’s water leg marks a major milestone for him because it is for his upcoming trip to the United States where he will attend Camp No Limits in Maine and then travel to Florida to meet the famous dolphin, Winter, who uses a prosthetic tail.

“Rio wants to show you how he puts his leg on,” Juliette adds while Rio moves around on his bed in the background.

“Hello!” Rio smiles as he waves his residual limb at the screen. Nolan, Caitlin and Rio chuckle. He then takes them through all the steps to putting on his water leg. For a moment the dads poke their heads on to the screens to say “hello.” Rio finishes putting on his leg, and then everyone is ready to start the “formal” interview.

Caitlin arrives in the kitchen unusually early dressed and ready for the day. She is wearing her new pink t-shirt that reads, “Girls can change the world.” 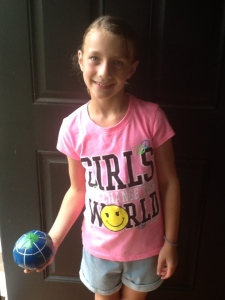 “Good morning,Cait…” I start to say when she interrupts me. She has more important things on her mind this morning.

“Mom,” she says as she looks down at her t-shirt. “I think they should make shirts that say, ‘Future Paralympians can change the world’.”

“I agree, Caitlin. We should make shirts that say…” she interrupts me again.

“Mom, they should make shirts that say, ‘Paralympians can change the world’, too.”

Nolan bounds into the kitchen still in his pajamas. “I can’t believe it! Today, I get to interview a future Paralympian.”

When I was researching the 2012 London Paralympic Games, I came across this photo of a young boy named Rio holding up a

mini Lego figure that he had built. The top of the figurine featured a brawny man with the typical rectangular torso, but it was his lower limbs that made me smile. Rio had created running blades for his Lego man. He had built one of his heroes, British Paralympic track and field star, Richard Whitehead. In the photo Rio’s eyes glistened with pride His little Lego “mini-me” figure and joyous smile reminded me that if you don’t see yourself in the world you can build it (especially with Legos).

I reflected on the photo and thought I should follow Rio’s lead and start building what I wanted to see in the world. Like Rio, I want to see a more inclusive world that celebrates ALL abilities. However, I am not as imaginative as Rio with Legos. Therefore, I knew I would have to build my vision with words. Jr. TeamPossible: Young Athletes Who Redefine Ability is my attempt to build a world where ALL young athletes are celebrated for how they redefine play, sport and ability and through their words we will shift perspectives and create change in our world.

Since I know adults can sometimes get in the way, my children (Nolan and Caitlin) will be conducting the interviews for the Jr. Team Possible. The interviews will be kids talking to kids about sports, life, and other important stuff. I encourage you to get involved by sharing the stories of our featured athletes. Let’s start building a more inclusive world together!

P.S. Check out a preview of things to come with theses super kids!