When I was researching the 2012 London Paralympic Games, I came across this photo of a young boy named Rio holding up a 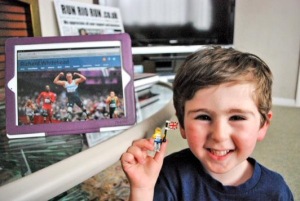 mini Lego figure that he had built. The top of the figurine featured a brawny man with the typical rectangular torso, but it was his lower limbs that made me smile. Rio had created running blades for his Lego man. He had built one of his heroes, British Paralympic track and field star, Richard Whitehead. In the photo Rio’s eyes glistened with pride His little Lego “mini-me” figure and joyous smile reminded me that if you don’t see yourself in the world you can build it (especially with Legos).

I reflected on the photo and thought I should follow Rio’s lead and start building what I wanted to see in the world. Like Rio, I want to see a more inclusive world that celebrates ALL abilities. However, I am not as imaginative as Rio with Legos. Therefore, I knew I would have to build my vision with words. Jr. TeamPossible: Young Athletes Who Redefine Ability is my attempt to build a world where ALL young athletes are celebrated for how they redefine play, sport and ability and through their words we will shift perspectives and create change in our world.

Since I know adults can sometimes get in the way, my children (Nolan and Caitlin) will be conducting the interviews for the Jr. Team Possible. The interviews will be kids talking to kids about sports, life, and other important stuff. I encourage you to get involved by sharing the stories of our featured athletes. Let’s start building a more inclusive world together!

P.S. Check out a preview of things to come with theses super kids!