Now dressed, Nolan sits down to eat his breakfast. He takes a bite of his blueberry muffin. “Mom, what do you think Rio is doing right now? I bet he is playing a lot of sports…It’s not fair. He’s had like 3 hours to play, and I just got up.”

I dial the Woolf family in London.

“I knew we would have technical difficulty,” Nolan states as I bumble over how to make an international call via FaceTime. I struggle to make it all work.

“Let me try it again,” I say as I hold my breathe and push the video icon. We wait as we imagine the familiar triple beep sound making it’s way across the Atlantic, and then Juliette, Rio’s mom, appears on the screen.

“Hello!” everyone shouts and waves at once, except Rio. He’s missing.

In a flash, Rio appears “I have three legs,” he explains as he attempts to hold his three prosthetic legs up to the screen (his “bendy leg” or knee-jointed day leg, his running blade for sports, and his water leg for swimming in the pool and ocean). 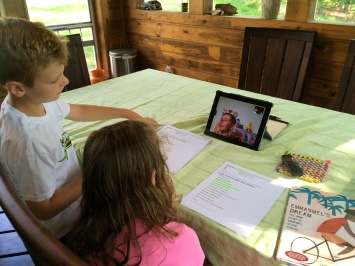 He immediately starts talking about his brand new water leg. He carefully turns it around in front of the screen. It is covered in colorful decals. Rio explains each picture. First, he shows us the logo from the Rio 2 movie. Next, he turns his leg to display his own personal logo Run Rio Run, the Brazilian flag, the 2016 Paralympic Games and two pictures of his favorite dolphin, Winter from Clearwater Marine Aquarium. Nolan and Caitlin look in awe, even a bit envious. Rio’s water leg marks a major milestone for him because it is for his upcoming trip to the United States where he will attend Camp No Limits in Maine and then travel to Florida to meet the famous dolphin, Winter, who uses a prosthetic tail.

“Rio wants to show you how he puts his leg on,” Juliette adds while Rio moves around on his bed in the background.

“Hello!” Rio smiles as he waves his residual limb at the screen. Nolan, Caitlin and Rio chuckle. He then takes them through all the steps to putting on his water leg. For a moment the dads poke their heads on to the screens to say “hello.” Rio finishes putting on his leg, and then everyone is ready to start the “formal” interview.