Welcome Sydney Collier to Team Possible! She is riding her way to Rio 2016 with her horse, Wentworth, service dog, Journey, and the support of her incredible family.

Hometown: I am from Ann Arbor, Michigan. Temporarily, my mother and I live in Millbrook, New York while my dad and brothers still live in Ann Arbor. This enables me to train with my trainer, Wes Dunham. My two younger brothers are Simon (almost 13) and Alex (almost 15). It’s not your traditional family living situation, but I have an amazing family that supports me. Even my grandparents moved from North Carolina to Michigan to help raise my brothers because they understood what was needed for me to reach my goals. It means so much to me to have my family supporting me, and it makes all the hard work and sacrifice worth it.

What sport or sports do you play? I just do para-dressage. It is all I have time for right now. When I was younger I did play

recreation soccer and baseball, but I was always the kid in the outfield picking the flowers. Then, one day when I was seven years old I sat on a pony named May. This pony taught me that anything is possible. In shows, May would win first place against all these big fancy horses. Riding her, I found a place where I really belonged. It was the best moment of my life. When you ride with horses, they evolve into your best friends.

What superpowers do you possess? Positivity. No matter what life throws my way, I can swing it into an opportunity. For example, last year my horse, Wentworth, got injured while playing in the pasture. His injury led to a required nine months of stall rest. This became a really difficult situation for me because I needed to continue training without my horse. Fortunately, I was able to get loaned two horses while Wentworth recovered. However, one horse was in Texas and one was in New York. My mom and I then had to travel back and forth between New York and Texas for me to train and show on the two horses. It was exhausting and really hard work, but it definitely made me a better rider. It also seemed to make Wentworth a better and stronger horse. When he was finally allowed to get back in the show ring he was really excited, and we picked up right where we left off. This past weekend we had a show and we got our best scores yet. It seems I  have the ability to keep going no matter what happens. I believe it’s called perseverance.

An Interesting Side Note…

During our conversation, Sydney mentioned that she will be traveling to Kentucky for the Nationals with Wentworth. I was intrigued with the idea of her traveling with horses which led to a side conversation about trailers that allow the horses to move around when going long distances. She also explained that last year when she traveled with the team to the World Games in France that for the first-time she traveled on a plane with horses. They all flew on a double decker plane that didn’t look much different from an ordinary plane, and most of the passengers had no idea there were horses on board. While the passengers sat up front, all of the horses were in a cargo area with stalls. During previously flights the stalls had been used to hold various animals including zebras, polar bears and even a dolphin.

What accomplishments in sports are you most proud of? This past year representing the U.S. at the 2014 Alltech FEI World Equestrian Games in France was amazing. I was the youngest competitor in the entire World Games. Then, in October when we returned home I found out I was awarded the prestigious honor of the FEI Against All Odds Award. I traveled with my mom to Baku, Azerbaijan to receive the award at the annual FEI Awards Gala. I have to admit that I didn’t even know 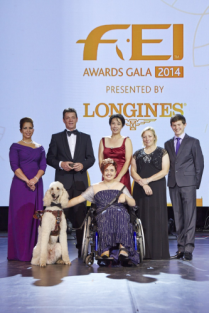 After we returned home from the FEI Awards Gala, I was named the USEF Jr. Equestrian of the Year. I was the first  para-equestrian to be honored with this award. The award ceremony was held in Kentucky allowing my whole family to come.  It was really amazing because they deserve the credit, too. They have been incredibly supportive in helping me reach my goals.

(We did have another side conversation here about her incredible interview upon receiving the FEI Against All Odds Award and her beautiful dress for this black tie event. Sydney confessed to being more comfortable in her barn clothes, but she does daydream of other events that she could wear the dress to in the future.)

What books inspire you? I actually don’t have much time to read, but I do read as much as I can.The best book I read recently, was Far from the Tree: Parents, Children and the Search for Identity by Andrew Solomon. 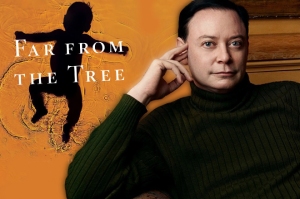 I was listening to a TEDTalk by the author and thought this would be a good book to read and learn from. I was amazed at the perspective of the book. It exposes  many people to a perspective they don’t think of very often: being an able-bodied parent raising a child with a disability. Since I want to be a special education teacher, I connected in many ways with the book. Through the book, I heard about a place in New York called the Cook Center where I would like to volunteer at some point. Currently, I volunteer twice a week with children who have behavior disorders and previously I have worked with children who have cognitive disabilities.

(I couldn’t resist another side conversation about becoming an educator and creating change regarding awareness of people with disabilities. Sydney then quotes an Aimee Mullins’ TedTalk about adversity which leads to mutual excitement for Mullins’ work and a shared love for TEDTalks. I then explain how I would love to turn Mullins’ talk on her 12 pairs of legs into a beautiful picture book for children. Sydney loves this idea and says, “Yes, then kids wouldn’t be afraid of someone who has had a leg amputated, but instead would say ‘Hey, that’s a really cool leg.’” She continues, “It is amazing the impact books can have along with parents teaching their children differently about people with disabilities.”)

Any suggestions for children’s book? I really like The Perks of Being a Wall Flower by Stephen Chbosky. It is a more alternative book about going through high school. The main character is a boy who at first just blends in and then he  breaks free finding friends who embrace him for who he is. It is a really good and fast read. 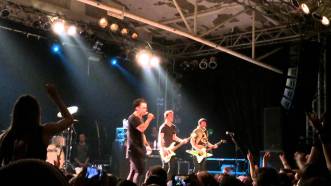 What songs are on your workout playlist? I listen to music all the time when I work out. I mostly like punk rock and some heavier metal. Actually, I like lots of hard rock. It has to be fast paced. There are two bands that I really love. One is Falling In Reverse and the other is Black Veiled Band. These two bands inspire me with their lyrics and keep me going when I am working out. In May I actually got to see and meet Falling In Reverse; it meant a lot to me.  Because a rock concert is not somewhere you are expecting to see someone in wheelchair, the band noticed me and lifted my wheelchair on to the stage. It felt great to be included and seen. I didn’t get into the mosh pit as much as I wanted to be, but I still had a good time. I love going to concerts.

What is your training schedule? Six days a week I ride Wentworth for an hour. Every day I use an exercise horse which I ride for an hour or an hour and a half. It is a great core workout. Then, I workout at the gym three days a week.  I also volunteer two days a week. I am a really busy person and I love it that way.

What is your sports story? Like Nick said in his interview, a story has an ending, and I don’t see this ending. I see myself always having a horse and a goal in my life. I don’t see myself ever not wanting a horse or working towards a goal. I also want to give the horses credit here. I couldn’t do it without them. They deserve more credit than me because it takes a special kind of horse to tune out the things my body does normally and to adapt to how I ride. I feel very lucky to have such amazing horses in my life. 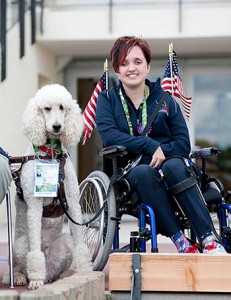 What advice do you have for other athletes? Don’t get discouraged. It seems like a long journey and it really is. There are all these ups and downs along the way. Just keep your eye on the goal. In 2010 when I went to watch the EquestrianWorld Games, I said to myself, “I want to do this.” Since then, even when Wentworth went lame and I was traveling back and forth between New York and Texas, I have stayed focused on my goals. Then, when I was actually competing at the 2014 World Games I was like, “Wow, I did all this no matter what life threw my way.” What really counts is how you face these challenges. You have to keep going no matter what. Also, don’t think your success at a local show is nothing. Every level is important. You have to say to yourself, “I am proud of myself for what I have done.”

Who would you like to thank? My horses. I want to thank all of the horses who have lent me their legs over the years. My family for all of their sacrifices. If I could thank everyone, I really would. I would thank everyone who has made this possible from my service dog, Journey, to the groomers…everyone. It’s not only me. I am lucky to have such a supportive family and team. I owe all of my successes to them.

The interview finally ends with Sydney inviting me and the kids to see her ride in Millbrook, New York. She wants us to meet Wentworth, Journey, her mom and some of the ponies at the stables. It looks like we will be going on a road trip soon and will share the adventure with all of our readers.

To learn more about Sydney and to stay up to date on her quest for Rio 2016, please visit her webpage at sydsparaquest or on Facebook at Syd’s Paraquest.

7 thoughts on “Sydney Collier: Para-Equestrian Rider and Against All Odds Award Winner”