In August we returned to Acadia National Park in Maine for a family vacation. We had been there five years earlier with Nolan and Caitlin. At that time Caitlin was just three years old and Nolan was five. During that trip, the kids hiked their first mountain and experienced the magic of Mother Nature. As a result, they too fell in love with the park.

This time Seth and I wanted to explore new and more challenging hikes with them. So we shared the trial maps, read the description of the hikes and let them decide on our daily adventures. They choose to start with some familiar, easier hikes where we shared memories from our first hikes in the park. Then, they wanted to try the more challenging Beehive Trail because of the cliff climbs and incredible vistas.

Caitlin bounded up the entire trail like a mountain goat. I tried to keep up, but instead of leaping like a billy goat I often found myself crawling on my hands and knees. The steel ladders stapled into the side of mountain left me shaking and crawling. To Caitlin’s credit, she waited at the top of each ladder climb reaching out her hand and asking, “Mom, do you want some help?” Each time, I eloquently responded through clenched teeth, “You can help by just standing still for one minute.”

Seth and Nolan were behind me because Nolan has a fear of heights, and I was to be his “guide.” However,  Nolan just kept yelling at me, “Mom, stop saying, ‘Oh my God’ in that shaky voice. It’s NOT helping.” So our trek up the Beehive wasn’t always pretty, but we did make it to the peak. And like seasoned hikers, we proudly celebrated our accomplishment with a few photos, apples and trail mix. 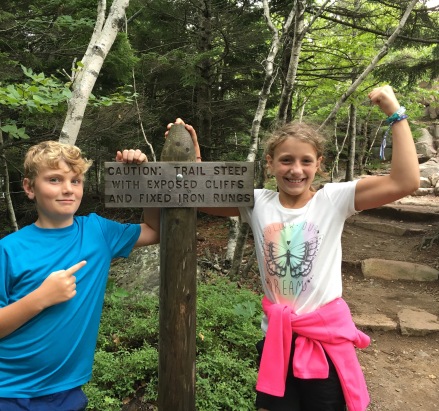 Over dinner, we retold our versions of the climb which sounded as triumphant as climbing Mt. Everest. With this boost in confidence, the kids decided they wanted to try a two-peak hike. The next day we would climb to the top of Acadia, enjoy a snack, and then transverse to the top of St. Sauveur Mountain. It would be a four-mile up and down journey, but we felt ready for the trek.

However, it didn’t take long before our confidence bubble started to deflate. Only a mile in we realized that I had left the second water bottle in the car that was parked at the trailhead. Who needs water when hiking four miles up two peaks in oppressive August heat? Okay, maybe we weren’t totally prepared. But more importantly, we had faith in ourselves.

Within an hour we reached the top of Acadia. It was stunning to look out over the mountains and ocean. Between the cool breeze, healthy snacks, and a few sips of water from our one bottle, we were ready to traverse to our next peak. The terrain was rocky, and we often found ourselves scrambling up boulders. It was a tough 2.5 miles. As we approached the summit of St. Sauveur, our pace slowed even more and the kids started to ask, “How much further?” One behind the other, Caitlin and Nolan trudged along. Nolan started to describe how the sweat was dripping down their backs. Caitlin shared that her legs burned. But…they never complained. They never asked to stop or give up. They just kept going one foot in front of another. After a long hour of slow yet steady steps, we rounded the bend to the summit.

At that moment, Caitlin exclaimed, “Mom, I have GRIT!”

Yes! Caitlin used my favorite four-letter word to describe her experience, her triumph…herself. She recognized that there will be times when we want to give up on our journey, times when we are experiencing physical and/or emotional pain that will make us doubt our own abilities, but it is during these times that we need to stay focused on our goal and to dig deep.

All of us on the top of Acadia Mountain. Photo Credit: A Kind Hiker

Caitlin experienced the power of grit on a mountaintop, but she learned it from her cousin, Nick Springer. He is one of the grittiest guys we know. She also recently observed grit in action when we watched the 2016 Rio Paralympics Games. During the Games, she watched Team Possible members Abby Dunkin , Mackenzie Soldan  and the gritty USA women’s wheelchair basketball team win a gold. In the pool she watched Cortney Jordan add to her medal count; while the gritty veteran, Brad Snyder set a world record in 100M freestyle. These champions embody grit and grace.

Caitlin and I love how Mackenzie Soldan defines grit:

“Grit is a good word. I would say it is taking a situation and fighting your way through it. Sometimes you have to fight for a long time, and sometimes it’s for shorter periods of time. Grit is having the drive to achieve something you want and not letting anything stop you. Even if it takes beating down the same problem or obstacle again and again. To have grit you don’t have to be a tough person, it is just a choice that you can make for yourself.”

So what choice are you going to make for yourself? We choose GRIT!