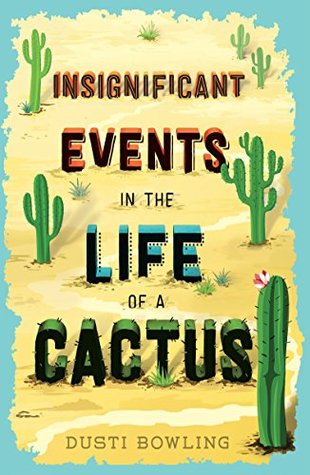 There are many reasons why I recommend this book, Insignificant Events in the Life of a Cactus by Dusti Bowling:

* Caitlin and I received this book as a gift from a friend. We have enjoyed talking about the characters, their struggles and trying to solve the mysteries in Aven’s life. When we finished the book, Caitlin immediately asked to write a book review. This is her first book review. I hope there are more reviews in her future.

Today was a remarkable day, and not just because the temperature in New England got into the 70’s during the month of February. It was an amazing day because Erin in our town Park and Recreation Department believed in the possible and the power of sports. And this mom is so grateful for having her on my team.

This story actually started a few weeks ago when I was trying to register the kids for spring sports. I kept questioning Ian and Caitlin what sports they wanted to play in the spring. It was a challenging conversation because I not only had to express what spring was like in New England to Ian, but I had to explain each sport to him and nothing seemed to interest him. Caitlin was engaged in the conversation, yet distracted. In the end, both kids accepted the opportunity to try track and field, but no one left the table with great enthusiasm.

I revisited the conversation the next day only to learn that Caitlin really wanted to play baseball, but she didn’t think it was an option because she was a girl. I explained that she could play any sport she desired. She then eagerly hung over my shoulder as I went to register her to play. Unfortunately, the online registration wouldn’t accept her information, and I had to disappointedly email our Park and Recreation Department about my difficulty in registering my daughter to play baseball. However, I got a prompt and apologetic response from Erin explaining that the form had been set to accept only one gender- male. However, she had reset it and that I should go ahead and register Caitlin. Caitlin beamed with excitement when I showed her the confirmation email.

So on this first day to get out and throw a ball, Caitlin and I played catch. She worked on her form and proudly grinned each time the ball solidly landed in her mitt. In fact, she even said, “Mom, I don’t plan to play as good as the boys. I plan to play better.”

While we tossed the ball back and forth, Ian sat watching unusually quiet. When we invited him to play, he replied, “I can’t. I only have one hand.”

“Of course, you can,” Caitlin quickly responded. I immediately thought of Jim Abbott. Doing the best I could, I showed him how he could tuck the glove under his arm while throwing the ball and then quickly switch the glove on to the same hand to catch the ball. He gave it a try with little success, but Caitlin wouldn’t let it end there. She coached him in throwing the ball properly, swinging the bat, and even running the bases. It was serious spring training here at the Stratton household.

After lunch, Ian begged me to register him to play on a baseball team like Caitlin. I promptly called Park and Recreation to sign him up. Erin answered and explained that it was late, but there were still a few slots open. I mentioned that Ian had joined our family in the fall and all of this was new to him making it difficult for him to decide on playing a spring sport. Her genuine excitement for Ian to engage in this new experience encouraged me to mention that he also had an upper limb difference. Expecting a pause, an awkward silence, I waited for her response…but she didn’t miss a beat. Instead, she responded that she would make sure he would be on a team with a returning coach who was more familiar with coaching young players. Then she asked if any of Ian’s friends were playing baseball. She wanted him to have some friends on the team to encourage him.  I then confessed that he thought he couldn’t play because he only had one hand. Worried she might doubt his ability, I quickly said, “I told him he could do anything.” This time she did pause and responded, “You’re a good mom.”

I will admit I needed to hear that. Being a mom is hard work. It is scary work, always second-guessing yourself. I am so grateful for her kind words today. I am so grateful for her changing the gender setting on the website and enabling me to register Cait to play baseball. I am grateful for her not asking about Ian’s English acquisition or his limb difference, but about his friends on the team. Today, Erin believed in me as a mom. She believed in Ian as a ballplayer, and she absolutely understood the power of sports for this family. Erin, thank you for making this a remarkable day!

F is for February, and it is a special time in the Stratton household. We have officially been a family of five for a total of four months. It hasn’t been an easy four months, but it has been filled with many unexpected beautiful moments. I thought I would share a few of them with you.

So there you have it, five moments that give you a glimpse of our journey as a family. Hope you take time this February to have fun and to reflect on your own family moments.