At the end of every baseball game in Ian’s Coaches Pitch League, the coaches select a player who gets the game ball. Often the game ball goes to the player who made a clutch catch, hit a double or tagged someone out during the game. It is an honor to receive the ball, and the young players cherish getting the game ball more than a win.

In one of Ian’s recent games, he didn’t make a clutch catch or tag anyone out.  Actually, I’m not sure he even touched the ball when he was playing in the outfield. However, he did get a hit. It was barely a single, but it earned him the game ball. Let me explain how it all happened…

Ian walked slowly up to the plate dragging his electric-green bat behind him. He positioned his feet parallel to the plate, slung his bat over his shoulder, got his back elbow up and looked at his coach signaling he was ready. Kneeling on one knee, Coach Nick lobbed the ball over home plate. Ian swung…and missed. Ian swung at the next ball and missed. He continued to swing and miss until the fifth ball. This time he swung and tipped the ball only to have the ball hit him in the forehead. After rubbing his head and talking to Coach Rori who checked his head,  Ian once again took his spot at the plate. This time looking tired and a bit nervous. Ian held tightly to the bat, swung and missed.

By about the eleventh pitch, I was standing anxiously with my hands clenched when Ian looked up at me wondering what to do. At this point, Coach Nick wiped his brow and encouraged Ian to keep swinging. Then, from the dugout one of his teammates started to chant, “Let’s go, Ian. Let’s go!” Instantly, all the other players stood up and joined in the chanting, “Let’s go, Ian. Let’s go!”

On the next pitch, Ian swung and hit the ball. It wasn’t a big hit. It didn’t even get past the pitcher’s mound, but it is enough for Ian to make it safely to first. Once on base, Ian jumped up and down waving his arms triumphantly in the air. Everyone cheered, and I felt like I was in a Disney movie as the tears welled up in my eyes. 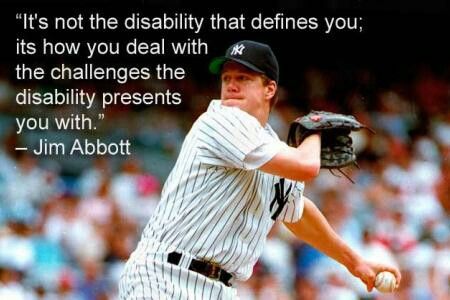 At the close of the game, the coaches gathered all the players in the dugout. I didn’t get to hear what was said, but I will always remember Ian running up to me while holding a ball high above his head smiling and shouting, “Mom! Mom! I got the game ball! I got it for not giving up!”

I can’t thank the coaches enough for what they taught Ian at that game. He learned to persist. He learned that when you surround yourself with others who believe in you that you can exceed your own expectations. Most importantly, Ian learned that he can do anything.

I also want to thank all of the players and their families. I am so grateful for all of the support you have shown Ian throughout the season.  It makes me proud to be a part of this community where differences are celebrated.

And just when I thought I couldn’t be more amazed by this baseball season, Ian ended his last game by taking the mound and pitching. Watch out Jim Abbott!

Finally, keep believing in the possible! I do.

Next week, we celebrate Ian being in our family for eight months, and it has been a beautiful journey powered by love. The only way I can describe the journey is living intensely from the heart- making it absolutely joyous while being incredibly exhausting. But now that I think about it, I guess that is how one could simply describe parenting.

For a person who loves the written word, I often find myself unable to write or speechless over these past eight months. I catch myself just standing still in awe watching Ian redefine what is possible for himself and anyone fortunate enough to witness how he takes on this new world. For his peers, he does this in school when he bravely shares stories about his life in China during class discussion. For his teammates, he does this on the baseball diamond when he plays second base, fields the ball and throws a player out on first Jim Abbott-style. For me, he does it everywhere we go. I mean everywhere- at the grocery store, the doctor’s office, the YMCA…everywhere.

When I do force myself to take a moment to breathe deep and observe Ian with his siblings, my eyes well up with tears. Literally strangers only 240 days ago from vastly different cultures and life experiences, they now cuddle on the couch in their pajamas, fight in the car on the way to school and tease each other over dinner. They are your typically troublesome trio and when they team up, watch out! With their creativity, energy, and perseverance, there is nothing that will stop them…well, except maybe bedtime.

These eight months have been the greatest gift that I have ever received, and I will share a few of the moments with you here in pictures. I hope these photos fill your heart with love and joy. I hope they make you believe in the possible.